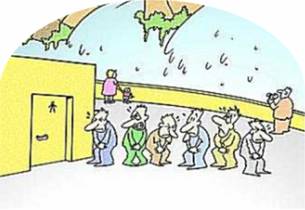 There is a wise saying “Nothing is unfair in love and war”. Probably that is why emperors of ancient days used to use many funny and clever tricks to fool the opponents. The most common technique was to scare the opponent away by out numbering them with imaginary soldiers. One of the funnier tricks (though hard to believe) was to give the own soldiers (not the opponent soldiers!) mild laxative dose so that there is a long queue of soldiers in front of toilet. Seeing this queue from a distance the opponent would miscalculate the total number of soldiers and flee away. This was a famous trick given by famous clown of the sub-continent named Gopal (The infamous “Gopal Bhar” to be precise). Another most common trick was to have square shaped holes while arranging the soldiers in rows and columns. Such an arrangement is shown below with 96 soldiers.

The strict property of such arrangement for this problem is as follows:

(a)    The soldiers have to be arranged in rows and columns.

(b)   The border of the arrangement has to be rectangular.

(c)    The arrangement should have soldiers missing only from the inner layers.

Now given the total number of soldiers S your job is to determine whether or not they can be arranged according to the above mentioned rules.

Input is terminated by line containing a single zero.